Run for the Kids 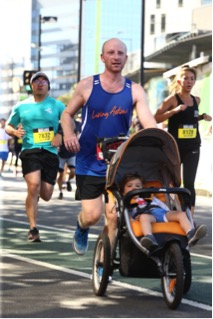 On Sunday, April 7, I participated in the first Living Active event – The Run for the Kids.

Being the day after daylight savings ended, it was a VERY early start. 5am became 4am and the kids were up ready to go! At least it meant I had plenty of time to prepare and arrived in the city in plenty of time to spare.

I arrived in the city just before 8am, loaded up the running pram and made my way to the arranged meeting point for the Living Active team. Everything was going smoothly until I remembered I needed to register the pram, which was done near the start line. The start line wasn’t far away, but navigating through 10,000 people with a pram and 2 kids is not easy! Then add in the 3 flights of stairs to get down to the start line and you have a problem! 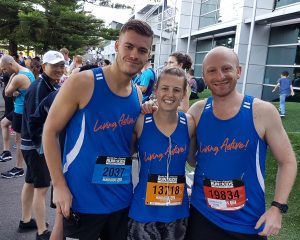 I made it in the end and still had plenty of time to meet up with the rest of the Living Active team for the pre-run photos and banter. Now it was time to run!

Because I was running with a pram, for safety reasons I was supposed to start at the back of a wave. I found myself waiting next to another pram runner and we exchanged pleasantries before starting to run. He looked like a serious runner so I planned to pace myself against him once the pack of runners thinned out.

The starting gun went and we were off! It was not the start I hoped for though because due to the volume of people in a condensed space, it was hard to find room to move. I soon got separated from the other pram runner and instead focused on NOT running people over!

After the first km it started to thin out. By the time I reached the Bolte bridge, I had found my rhythm and was moving well. There was a great atmosphere on the course and the supporters and volunteers did a great job of keeping the energy up the whole way. I had many people yelling out support and informing me that my son was fast asleep in the pram and enjoying the ride!

As I passed through a drink station at the top of the Bolte bridge, out of the corner of my eye I noticed a pram-runner coming up behind me. It was the same guy from the start line and we ran the next few kms together. It was really helpful working in a “team” where one of us would pave the way for the other and make room between the other runners we were passing. Unfortunately, once we got off the bridge, the roads narrowed and we got separated again.

The last few kms were fairly patchy. It was hard to get any rhythm with so many people around but it gave me an opportunity to soak up and enjoy the atmosphere. I passed through the finishing tunnel and my wife and older son were there cheering. Nadav jumped over the fence and helped push the pram the rest of the way and it was the perfect way to finish a great event 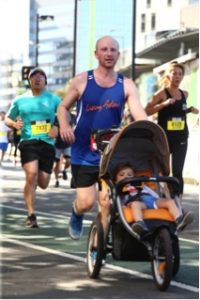 I finished the 12.8km course in 1 hr 5 min 26 sec.
The Living Active team managed to raise $743 for the Royal Children’s Hospital!

Special thank you to

If you would like to join us for the next event, check out the details at https://www.healinghandsosteopathy.com/living-active-team/ and sign up for our newsletter! 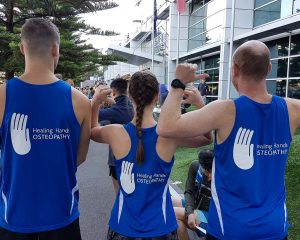